HOOKSETT, NH -- The New Hampshire Avalanche are pleased to announce that Jimmy Minnig has committed to Southern New Hampshire University (SNHU) for the fall of 2022. The '01 native of Auburn, PA is in his 2nd season with the Avalanche, and through 56 career games in the Eastern Hockey League (EHL), Minnig has tallied 17 total points to his credit.

"Jimmy came to us last season and he got better every day since arriving," said EHL head coach and general manager Chris Cerrella. "He battled in year one, but since then, has developed into a very reliable defenseman for us this season. He put a lot of time into his game in the off-season and I believe he is only going to get better as he gets older. We are very proud of Jimmy and his accomplishments and I think he’s going to do a great job for Coach [Sean] Walsh at SNHU. I wish him and his family all the best!"

Minnig will still be around throughout his time in college, as the SNHU Penmen also call the Ice Den Arena their home. It's also worth pointing out that the sturdy defenseman is one of two Avalanche players that will be joining SNHU this fall, as he will remain teammates with another defenseman in Alex Muthersbaugh. Minnig is beyond excited to have this weight off of his shoulders before the Frozen Finals, and extremely grateful to everyone that helped him along the way.

"I’m extremely excited to spend the next four years at Southern New Hampshire University," said Minnig. "I’d like to thank all my teammates, coaches, friends, and the entire Avalanche organization for their support. Most importantly, I’d like to thank my family for their endless support and sacrifices to help me achieve my goals and become a better person.  I’m excited to be a contributing member of the Penmen organization!"

Looking forward, Minnig now has one last week for him to leave his mark on the EHL, as the Avalanche are set to make their 4th appearance in franchise history at the Frozen Finals. In all three of the previous appearances, the Avalanche have reached the Championship Game, skating away victorious twice. 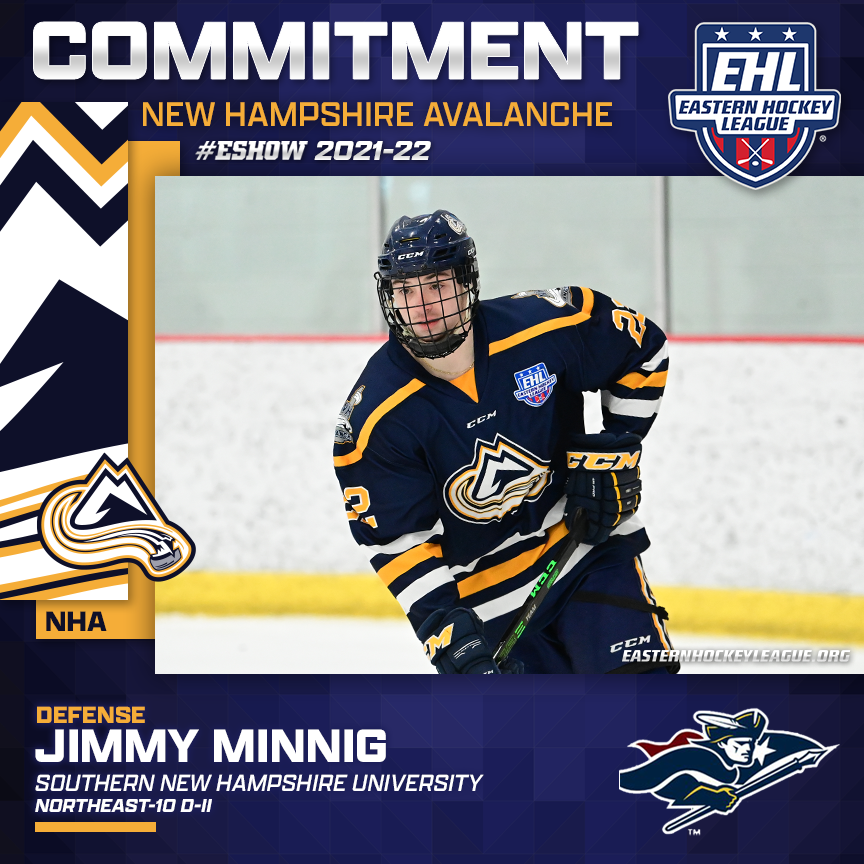