HOOKSETT, NH -- The New Hampshire Avalanche are pleased to announce that Alex Muthersbaugh has committed to Southern New Hampshire University (SNHU) for the fall of 2021. The '01 native of Gilford, NH is in his 2nd season with the Avalanche, and in 47 career games in the Eastern Hockey League (EHL), Muthersbaugh has collected 10 assists to his name.

"Alex plays the game the right way," said EHL head coach and general manager Chris Cerrella. "He defends, blocks shots, and moves pucks well. He is committed to his teammates and getting better every day. Alex played U18 for us and moved up the ranks to NCAA college hockey. We could not be more proud of him, and I am so excited for this young man. He has been a big part of our success and I know he will continue to improve at SNHU. He will be a great addition to their school and hockey program."

As Cerrella mentioned, Muthersbaugh takes care of business in many areas that don't show up in the box score. The defensive defenseman is never afraid to block a shot, and this factor has helped his team win many games over the last couple of years. The New Hampshire native is also beyond excited to be staying right at home for the next four years of his hockey career.

"I am excited to announce my commitment to further my academic and athletic careers at Southern New Hampshire University," said Muthersbaugh. "I’m looking forward to becoming a contributing member of the Penmen organization and feel prepared for the journey that lies ahead. I want to thank my family, especially my dad, for his unrelenting support and for allowing me to pursue my dream of playing college hockey. I want to thank Coach Cerella for taking a chance on me and lending his expertise to help me grow and develop, not only as a hockey player, but as a young adult. I am looking forward to becoming a Penmen and am excited to be under the guidance of a talented coach like Coach [Sean] Walsh."

Muthersbaugh and the Avalanche hit the holiday break on the high note, winning five games over a seven-day period. Now, looking ahead, New Hampshire will return to action on Tuesday, January 11th against the Boston Jr. Rangers, with the hopes of extending their active winning streak out to eight games. 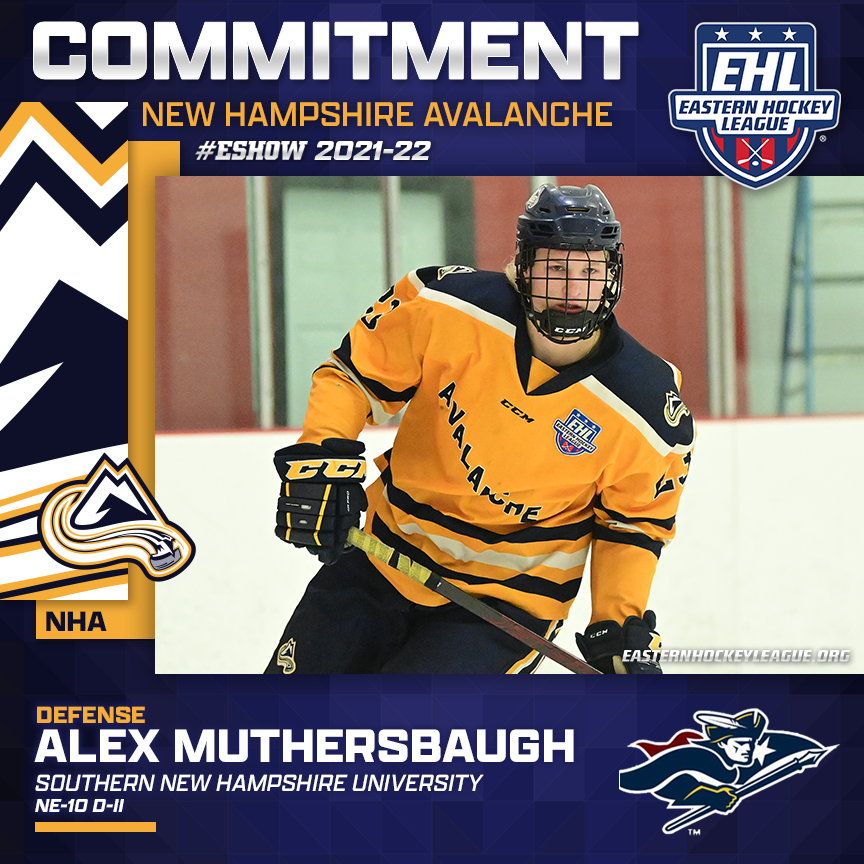