HOOKSETT, NH -- The New Hampshire Avalanche are pleased to announce that Parker Sondag has committed to Wesleyan University for the fall of 2022. The '01 native of Deerfield, IL is in his 2nd season with the Avalanche, and in 49 career games in the Eastern Hockey League (EHL), Sondag has scored 21 goals to go along with 25 assists.

"Parker came to us last season from Brooks Prep and has been a great player and a great young man," said EHL head coach and general manager Chris Cerrella. "He wanted to play in the NESCAC and he achieved his goals with us, and we could not be more proud of him. He is a big part of our team and organization and I think he is going to do great things at the collegiate level. Wesleyan has added another good Avs player as he will join a group of former Avs in Wiggle Kerbrat, Henry Carlson, and Kyle Anderson.  Parker will be a great addition to the Wesleyan family, both on the ice and in the classroom."

As Cerrella mentioned, Sondag joins strong class of former Avalanche players that are now at Wesleyan, and overall, he's the 14th player in program history to choose a school in the New England Small College Athletic Conference (NESCAC).

"I am honored to announce my commitment to further my academic and athletic career at Wesleyan University," said Sondag. "Without the support of my family and coaches, I would not be hockey player I am today. I have been fortunate enough to have had great coaching along the way, which has helped me grow both on and off the ice. I want to thank the New Hampshire Avalanche organization for helping me these last two seasons. It’s a dream come true to be able to continue playing hockey, specifically in the NESCAC. I am truly thankful for the opportunity to continue my journey as a student-athlete."

Sondag sustained an injury that kept him out of the lineup this season until the middle of November. However, since he re-joined the forward group, he's averaged nearly a point per game with eight points in nine total contests to date. It's also worth noting that the Avalanche own a record of 8-1-0 in those nine games. 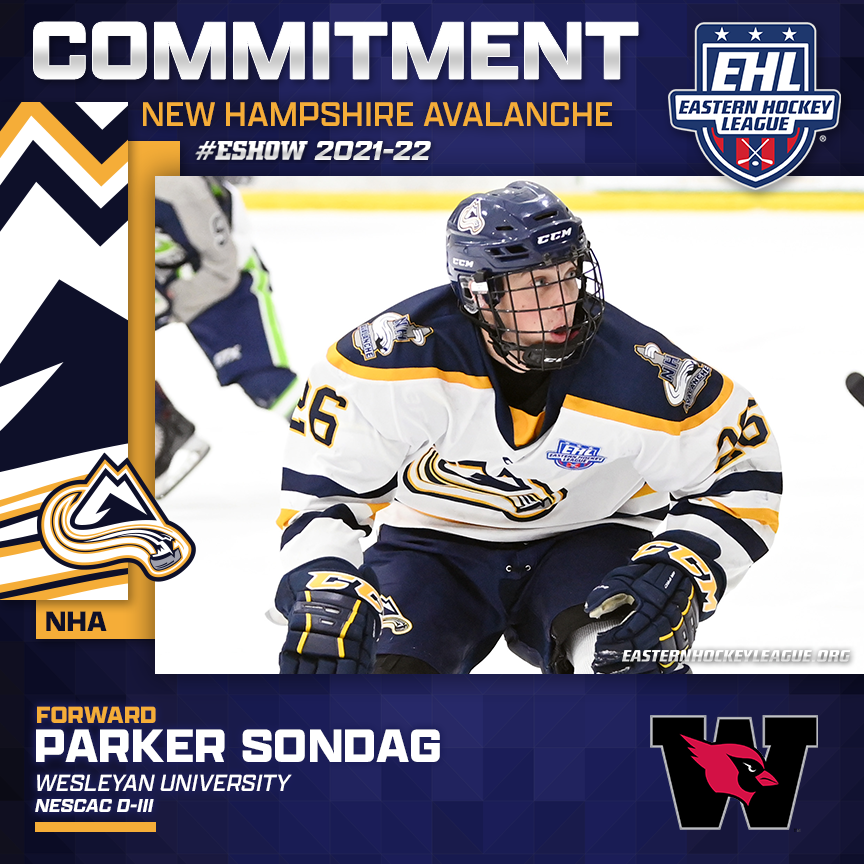