HOOKSETT, NH -- Over the holiday weekend, Robert Martiniello, an '03 defenseman for the New Hampshire Avalanche, officially signed a tender agreement with the Corpus Christi IceRays of the North American Hockey League (NAHL). Martiniello skated as a rookie in the EHL this past season, tallying 19 points in 35 total games. 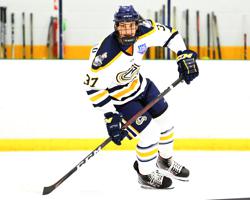 Martiniello skated as a rookie in the EHL this past season, tallying 19 points in 35 total games.

"I'm very proud of Robert for earning this opportunity at the Tier 2 level," said EHL head coach and general manager Chris Cerrella. "This past season was his first year of junior hockey, and you would never have known while watching him play. Robert adjusted seamlessly to the speed of the EHL, and didn't shy away from the physicality that the league features. I'm really looking forward to watching him continue to develop under a former player of mine at the next level."

As Cerrella mentioned Martiniello becomes a former player of his as he moves onto the NAHL, where he will follow the lead of Michael Lysyj, another former player of the Avalanche coach. Lysyj played for Cerrella back in the 2007-08 season, and he was officially named the new Head Coach for the IceRays back on May 24th.

The Avalanche would like to wish Martiniello the best of luck as he heads off to Texas this fall.